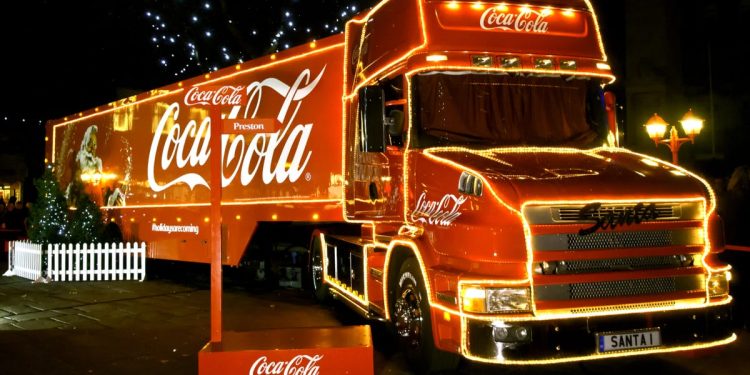 The drinks giant’s long-running Christmas trucks spot will return later this month, having proved its effectiveness over recent years.

Coca-Cola will not be running an additional brand Christmas campaign this year, instead focusing on its long-running festive ad ‘Holidays are Coming’.

The soft drinks giant launched a second brand film to run alongside Holidays are Coming in both 2020 and 2021, but this year will only run its famous Christmas trucks spot, which has appeared on screens annually since 1995.

Holidays are Coming has not yet launched on TV this year, but is due to do so before the end of the month. Considered by many as the signal that Christmas has officially begun, the spot continues to feature among the top-ranked festive ads each year.

Last year Holidays are Coming was ranked by effectiveness research firm System1 as the second most effective Christmas ad of 2021. Awarding all of the year’s festive ads a ‘star rating’ between one and five as a predictive indicator of its brand-building ability, Coca-Cola’s scored an “exceptional” five stars, and was beaten only by Aldi’s ‘A Christmas Carrot’ campaign.

Analysis by insights and consulting company Kantar came to the same conclusion, while also ranking the spot in the top 2% of all UK ads in its ability to generate brand connection.John Lewis fails to beat Asda in Christmas ad effectiveness rankings

Coca-Cola’s additional Christmas campaign in 2021 came under its ‘Real Magic’ platform and celebrated “human connections”, with a story about a boy with no chimney. This ad ranked 19th on System1’s platform, scoring a “good” 3.7 out of five on its star rating system.

The year prior saw Coca-Cola score highly across both its festive ads, which included ‘The Letter’. The Letter depicted a father who went on a mission to hand-deliver a letter to Santa Claus, and ranked fourth overall out of the 2020 Christmas ads with 5.4 stars.

However, Holidays are Coming scored 5.9 stars in 2020 and was System1’s top Christmas ad of that year. Kantar also ranked it the most effective Christmas ad of 2020, deeming it the top-performing ad in seven out of 10 key measures and scoring the ad 96 out of 100 in terms of long-term return potential.

The long-running nature of the Holidays are Coming spot is something of a phenomenon, with marketers often concerned that audiences will tire of their ads after a period of time. However, research shared exclusively with Marketing Week by System1 earlier this week suggests the impact of effective ads do not significantly decline over time, and in some cases effectiveness can even improve.

However, this year Holidays are Coming faces a particularly tough field of competitors in the effectiveness rankings. While last year a five star rating put it in second place in System1’s rankings, this year that score would not make the top 10. Four of this year’s Christmas ads have achieved a score of 5.9, with Asda’s ‘Have Your Elf a Merry Christmas’ coming out on top.

Get Xbox Live Gold for Our Lowest Price