Gap shrinks between industry’s view of media habits and reality 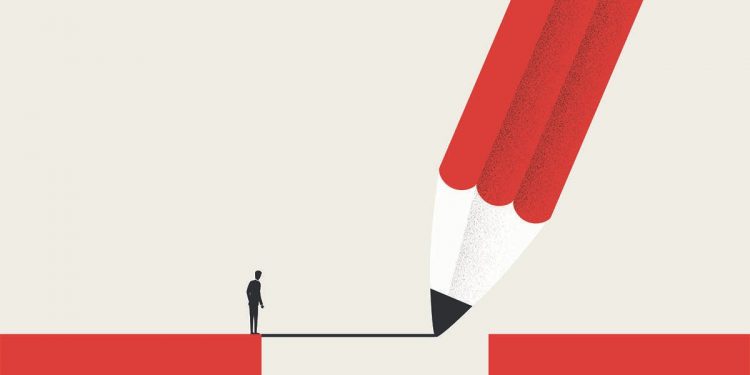 The disconnect between how the industry views consumers’ media consumption and the reality is improving, but there are still some major gaps, particularly on newer platforms and across older generations, according to new data from Thinkbox.

The Abnormal Behaviour study explores the differences in media consumption and perceptions of media professionals versus the average person in the UK, looking at TV content and viewership, use of social media and advertising.

However, while there is a 40-minute gap between the industry’s perception and what consumers say, it is closer than when the study was last carried out as part of Thinkbox’s Ad Nation report in 2016. Back then media professionals under-estimated the figure by more than an hour. The estimate by media professionals is also more in line with BARB data for TV viewing for the first half of 2022, which puts the figure at two hours and 24 minutes. 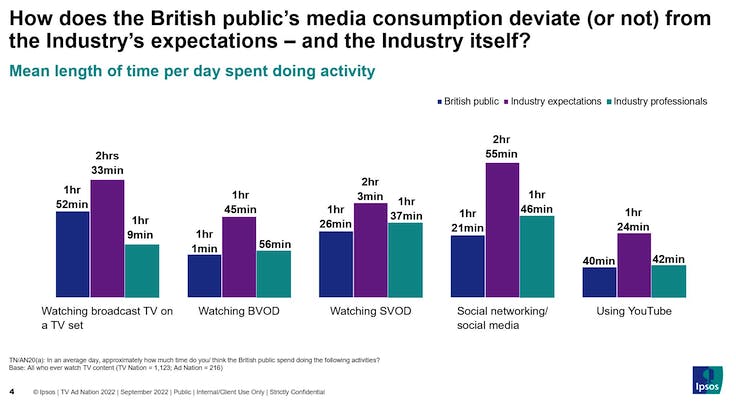 Likewise, while the general public suggests they watch an hour and 26 minutes of subscription video-on-demand (SVOD), the industry puts the figure much higher at two hours and three minutes. This could be because media professionals put their own consumption of SVOD at one hour and 37 minutes.

This is further reflected in the consumption of specific shows. While 62% of media professionals have seen at least one episode of hit Netflix series Squid Game over the past two years, for example, just 26% of the UK public claim the same. And while 52% of people working in the industry have watched Sex Education, just 18% of the general public have.

Thinkbox’s research and planning director, Matt Hill, describes the latest findings and the fact the gap is lessening as “encouraging”.

“It shows that as an industry we look to be getting better at being market orientated,” he tells Marketing Week.

You cannot use your own behaviour as a way to help your thinking – you have to be market orientated.

Hill believes better training as well as studies such as those by Thinkbox and others including Reach Solutions’ The Empathy Delusion and Newsworks’ Sample of One, have gone a long way to helping media professionals realise the disconnect between how they view the general public’s media habits versus what is actually happening.

“This is something we didn’t really talk that much 10 years ago,” he adds, suggesting agencies have got better at introducing training programmes and ways in which they educate people.

He believes online courses such as Mark Ritson’s Mini MBA have also helped. “The first module in that says the number one lesson when you sign up to be a marketer is you have to realise that you cannot use your own behaviour as a way to help your thinking – you have to be market orientated,” says Hill.

However, there are still areas where marketers need to “watch out”, the study shows, particularly around some of the newer platforms and when it comes to differences between generations, which can again be avoided by becoming more market orientated, Hill suggests.

Likewise, the general public is spending 40 minutes on YouTube each day – nearly equal to media professionals own consumption of 42 minutes – but the industry’s view of people’s YouTube consumption is far higher at one hour and 24 minutes. 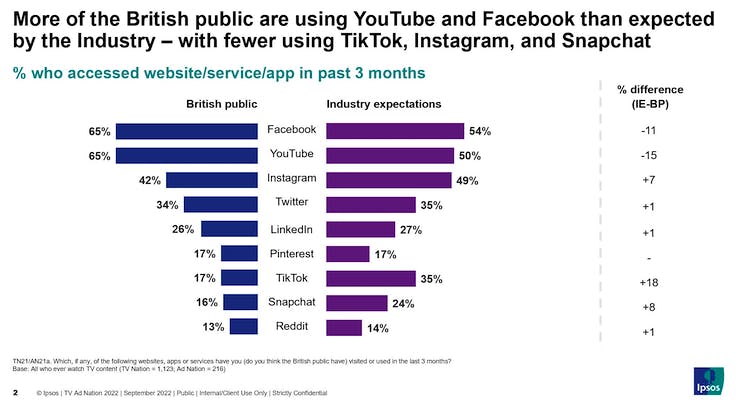 The data also shows that while 65% of the general public say they have used YouTube over the past three months, the industry believes this is far lower at 50%. Media professionals’ own use of YouTube is at 85%.

It is the newer platforms that appear to be catching out media professionals the most, however, with Hill suggesting people in the industry should be “consciously aware that we’re going to be particularly biased about the latest shiny thing”.

While 35% of people within the industry expect the average person to be on TikTok, for example, just 17% of the general public say they use the platform. By comparison, 43% of media professionals have used TikTok themselves over the past three months.

Likewise, 24% of professionals believe the British public are on Snapchat, but in reality just 16% of people say they are.

Media professionals are much closer in their estimates of more established platforms, however. Just over one third (34%) of the UK public say they are on Twitter, for example, while the industry puts the figure at 35%. Similarly, 26% of the general public say they use LinkedIn, while media professionals put it at 27%, and 17% of the public use Pinterest, with the industry estimating the same. 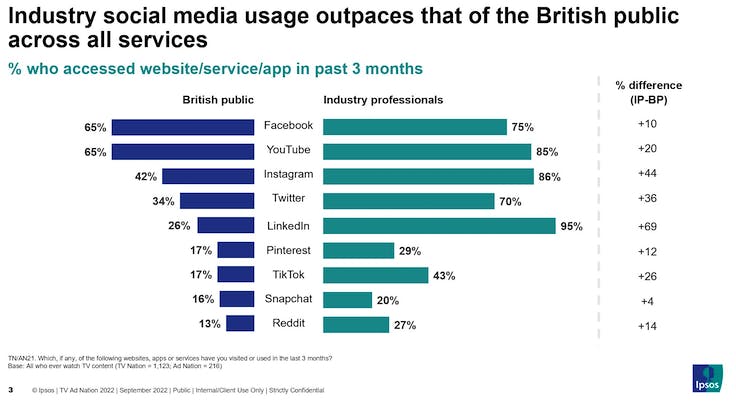 Although a little further out, the industry’s view of people’s use of Facebook and Instagram is also more aligned. Nearly two-thirds (65%) of people say they use Facebook versus the industry’s expectation of 54%, while 42% of the general public say they’ve been on Instagram in the past three months, which compares to the industry’s estimate of 49%.

“When we did this in the past, Facebook and YouTube usage was being really overstated,” Hill explains.

“Whereas now the more established platforms that have been around for longer, the industry is pretty close on them. We need to watch out and be mindful of anything that’s particularly new. Let’s make sure our assumptions are correct on it before we make any planning based around that.”

Another issue raised by the study is that media professionals are not as in step with the views of older generations, which is another key reason for the gap between perceptions and reality. This again comes back to the industry skewing younger and being overly influenced by its own behaviour, Hill says.

“As a population [the industry is] much younger than the population as a whole. We’re also more London-centric. So I think those two things do impact us and [mean we] start to forget about older generations and their media behaviour and how they influence things,” he says.

“The crucial thing on this, and something we’ve always been bad at as an industry, is that we undervalue the expendable income or the wealth that’s available across the older population.”

We need to watch out and be mindful of anything that’s particularly new.

He believes the industry tends to focus more on younger audiences as “their behavioural shifts are more interesting and they’re more extreme” and media professionals can “probably understand them better”.

“What we’ve found with the research is that the industry expectations were much closer to that of younger people. And it was the older people that were driving the fact that they were getting it wrong. If they’d been able to properly understand how impactful or how influential older generations are on the population as a whole, then they’d be more accurate in their answers.”

When it comes to perceptions of advertising among the general public, TV comes out as the highest ranking channel nearly across the board in terms of things such as trust, entertainment, helpfulness and drawing attention to new brands, products and services. 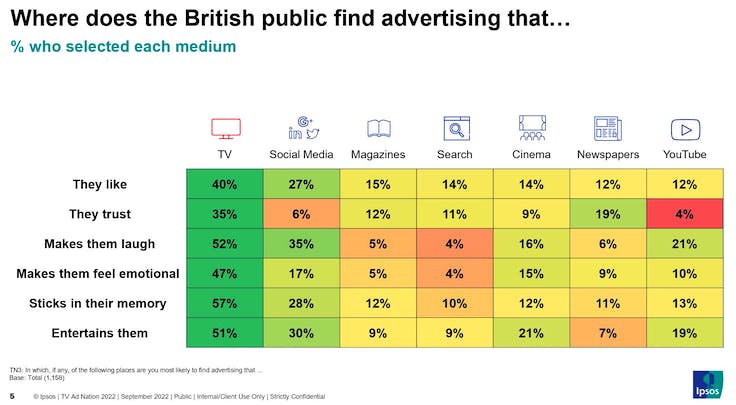 The general public also suggests TV advertising is more likely to stick in their memory (57%) than other channels. Just over a quarter (28%) say advertising on social media stays with them, versus 13% on YouTube, 12% in magazines and cinema, 11% in newspapers and 10% in search.

TV is also way out in front when it comes to driving fame, according to 66% of the British public. Social media comes in second (34%), followed by newspapers and magazines (both 19%), cinema and YouTube (both 16%) and search (15%). 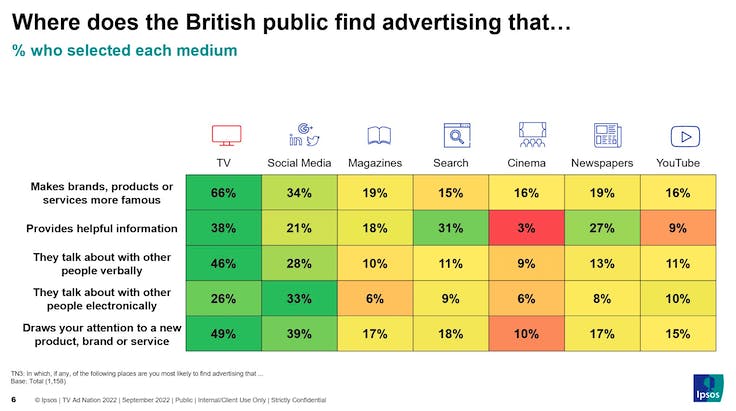 The only area that a channel scores above TV is ‘talking about advertising with other people electronically’, where 33% of people say social media is the most popular medium for this – compared to 26% who say the same for TV.

When talking about advertising verbally, however, TV again comes out on top, with 46% compared to 28% for social media.

How to Unlock Your Company’s Value in the ‘Circular Economy’