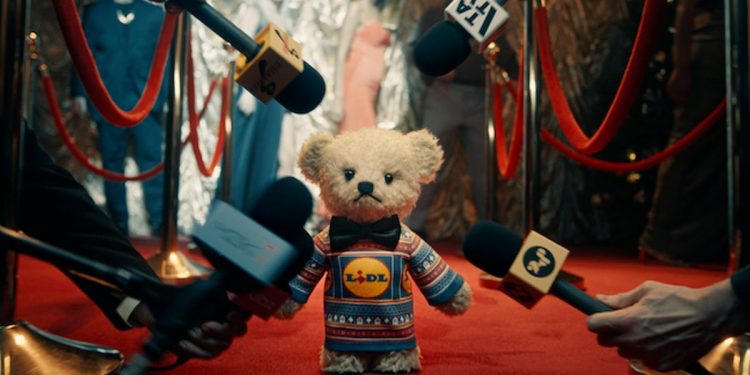 Lidl is encouraging consumers to focus on the importance of family and friends this Christmas with the introduction of the ‘Lidl Bear’, a new festive brand mascot.

The bear’s adventure begins when a dad accidentally shrinks his Lidl jumper in the wash, and his young daughter is inspired to put it on her teddy bear. Although the bear doesn’t move or speak, he attracts mass attention in the aisles of Lidl and is identified as the perfect mascot for the supermarket.

Lidl Bear becomes the face of the Lidl Christmas ad campaign and is seen undergoing the highs and lows of fame. However, when the little girl goes on TV to call for her bear to come home, he parachutes down the chimney in time for Christmas dinner.

The 60-second film launches on TV today (4 November) during ITV’s Coronation Street, following a series of sneak peeks around the UK this week. Social media and print ads teased content from the ad to build consumer curiosity, while six short films ran across ITV depicting the bear’s arrival at ITV Studios, sitting in an ITV dressing room and on a talk-show sofa.

The hero ad will be supported by a series of 20- and 10-second edits focused on the Lidl Bear and his family at the Christmas dinner table, highlighting different products in the retailer’s Christmas food and drink range.

By displaying no emotion it manages to create humour and deliver our message about what’s actually important this Christmas.

Additional activity will take place across broadcaster video-on-demand (BVOD), outdoor media, cinema, print, digital and radio. The campaign was created by Accenture Song, with media planning and buying managed by OMD, social media by We Are Social, and PR by The Romans.

Christmas brand characters are often introduced and utilised during the festive season, with rival Aldi’s Kevin the Carrot a particularly famous example. However, Lidl GB’s marketing director Claire Farrant says the Lidl Bear “stands apart” from other Christmas characters because of its “hilarious, deadpan expression”.

“By displaying no emotion it manages to create humour and deliver our message about what’s actually important this Christmas,” she says.

While Aldi is known for selling extensive Kevin the Carrot merchandise, Lidl has said it won’t be selling any Lidl Bears in stores this year.

“In the face of unrealistic Christmas expectations and pressure, we know what really matters is being with the people we care about,” Farrant explains.

However, the character will be at the forefront of the supermarket’s charitable drive this Christmas, with a nationwide donation initiative – Lidl Bear’s Toy Bank – to deliver new or unwrapped toys and games to children across the UK.

How to Solve Quiet Quitting Without Shaming Employees

How to Start a Production Company

Why 2023 is The Year for Small Agencies to Thrive?

Harness the Power of Influencer Marketing for Your Retail Business

SEO Marketing : How To Market Your Business On The Web Using SEO