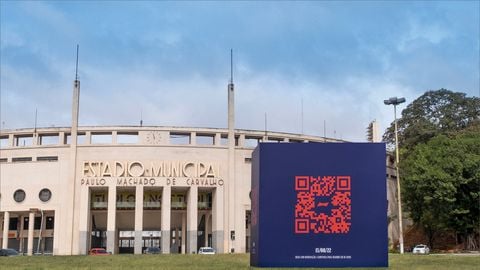 The World Cup is still months away, but Budweiser is looking to stoke early excitement around its involvement with the tournament through the prize box scavenger hunt. The AB InBev brand is tying together a mix of mobile and out-of-home (OOH) elements and its ambassador relationships to get fans involved, with the chance to win grand-prize tickets to the event in Qatar.

Leo Messi, Neymar Jr. and Raheem Sterling — three soccer superstars — all factor into the effort and have been teasing the campaign on social media this week. An earlier Instagram post by Messi had generated over 1.4 million likes at press time.

Messi also stars in an ad where he acts as the master orchestrator of the prize drops. The spot, which draws on the style of gritty espionage thrillers, sees the forward deploy a crack team to place red boxes bearing the Budweiser branding in various cities around the globe. Neymar Jr. and Sterling make cameos as well.

In real life, Budweiser has set up QR codes at locations that carry meaning for its athlete partners. The codes appear in OOH placements on Wembley Stadium, near where Sterling grew up, as well as the street where Messi started playing soccer in Argentina and Pacaembu Stadium in Brazil, where Neymar Jr. had his first professional match. Conceptually, the marketer is trying to draw a link between soccer’s past, present and future.

“This year’s tournament is a unifying global moment that celebrates the possibilities of what’s to come and the athletes that continue to inspire us,” said Todd Allen, global vice president of marketing of Budweiser, in a press statement.

Budweiser has worked with FIFA for decades, with this year’s World Cup its tenth as a sponsor. While soccer has seen growing traction in the U.S., Budweiser is not running the prize box promotion there. However, a website page promises “several surprises” in the near future.

FIFA’s choice of Qatar for the 2022 tournament previously drew pushback, including from sponsor Budweiser, amid allegations that officials bribed the sports organization to secure the hosting duties.