Driver Arrested in Apple Store Crash That Killed One, Injured 20 Others 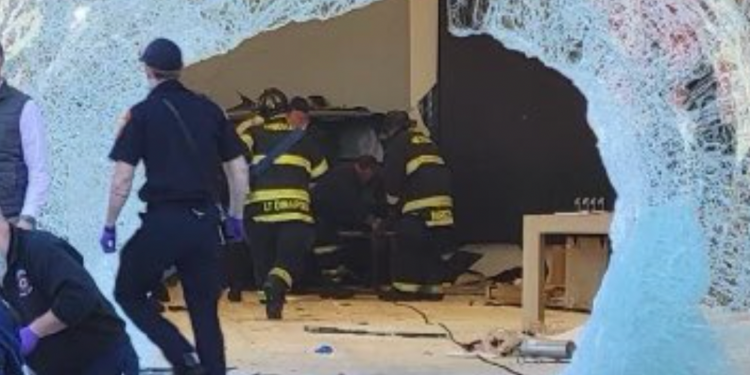 The driver of an SUV that left one man dead and 20 injured during a crash into a Boston-area Apple Store on Monday has been arrested and is claiming that the crash was an accident.

Bradley Rein of Hingham, Massachusetts was charged with motor vehicle homicide by reckless operation.However, the 53-year-old is claiming his right foot was stuck on the gas pedal, and when he tried to use his left foot to try to hit the brakes, it was unable to stop the accelerator.

The police report maintained that Rein had no visual impairment or other medical issues that might have caused the accident, and that he claimed his vehicle has been regularly taken in for inspection.

Though Rein holds no criminal record in Massachusetts, he does have a record of a DUI in Roxbury, Vermont following a crash in 2020.

Chaos ensued in an Apple store in Hingham, Massachusetts when a Toyota 4Runner crashed through the front window, killing one man and injuring 16 people.

The incident occurred on Derby Street just after 11 a.m. on Monday. Videos and photos on social media show a giant hole through the glass storefront, with the car set all the way in the back of the store with firefighters surrounding the ground as people became trapped inside of the store.

Just getting this picture from a contact in Hingham, MA and the rescues underway right now. I’m being told four people are trapped in the Apple store. @boston25 pic.twitter.com/aoKdL9o2xt

Scene here from Hingham where a car went right through the front of an Apple Store @wbznewsradio pic.twitter.com/l5eyXqETg0

ABC News reported that at least three people were seen being carried out on stretchers.

“Right now, family members are being notified or in the process of being notified,” Plymouth County District Attorney Tim Cruz told media around 1:20 p.m on Monday afternoon. “This morning was an unthinkable morning, and people are trying to process what happened. … This investigation is active and ongoing, and we are very limited as to what we can say at this point.”

Jen was up at Derby Street. Sounds like a horrible scene. Car drove through the Apple Store. #hingham pic.twitter.com/E1yQUU3QQy

The scene at the Apple store at Derby Street in Hingham. Vehicle ended up inside store. pic.twitter.com/pg8ENiDopD

14 ambulances and seven fire engines came to the scene, as did one medical helicopter.

14 victims were rushed to South Shore Hospital and two were taken to other Boston-area hospitals.

In Hingham, Massachusetts, a vehicle collides with an Apple Store, prompting the arrival of dozens of emergency personnel. pic.twitter.com/cvWdL3Omyg

“There’s probably close to ten ambulances in the parking lot right now, along with a lot of fire engines, and police vehicles,” a witness told ABC News. “The parking lot was very, very busy so I’m assuming there was a lot of people in the store.”

This is a developing story.

Macy’s bets on the metaverse for Thanksgiving Day Parade