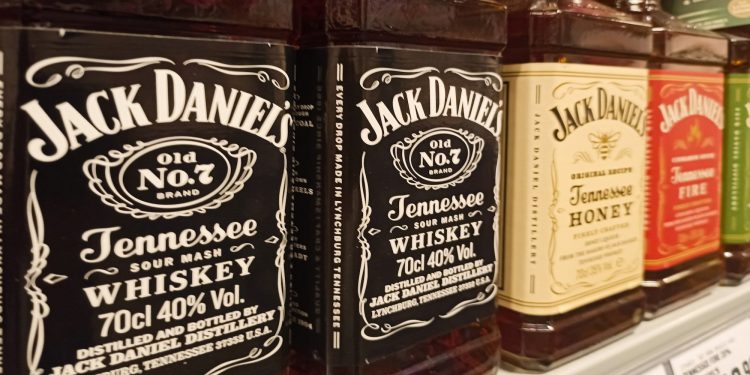 Whiskey maker Jack Daniel’s has a bone to pick with a squeaky dog toy, and they’re playing fetch all the way to the Supreme Court.

The iconic alcohol brand has filed a lawsuit against dog toy manufacturer, VIP Products, over its “Bad Spaniels” toy, which mimics the whiskey’s signature bottle and branding. The toy swaps the bottle’s usual copy with “poop humor,” including switching “Old No. 7 brand” and “Tennessee Sour Mash Whiskey,” with “The Old No. 2 on Your Tennessee Carpet.”

SCOTUS has agreed to hear a dispute between Jack Daniel’s and a company that makes squeaking “Bad Spaniels” dog toys. The case will have implications for the tension between parody & intellectual property. https://t.co/OmR3rimMCH pic.twitter.com/aegop8lb83

Although the toy, which costs between $13 to $20, notes “This product is not affiliated with Jack Daniel Distillery,” on its packaging, the Supreme Court has agreed to hear the dispute, which calls trademark law and the First Amendment protection of parody into question, per USA Today.

However, the highest court won’t see the case until early 2023, according to CBS News, but a decision is expected before the court’s summer recess.

In a Supreme Court brief last month, the dog toy company argued that their “Bad Spaniels” squeaky was all in good fun. “It is ironic that America’s leading distiller of whiskey both lacks a sense of humor and does not recognize when it – and everyone else – has had enough,” representatives for VIP products said, per USA Today.

Meanwhile, the liquor company is arguing that misrepresentation is no laughing matter. “To be sure, everyone likes a good joke,” Jack Daniel’s lead attorney, Lisa Blatt, wrote in her court filing, per CBS, “But VIP’s profit-motivated ‘joke’ confuses consumers by taking advantage of Jack Daniel’s hard-earned goodwill.”

Save 25 Percent off This Top-Rated Smart Lock