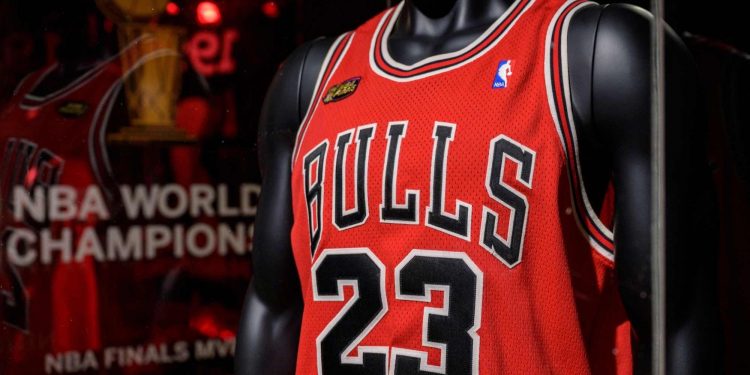 One of Michael Jordan’s “Last Dance” jerseys took its final bow after setting the record for the highest-priced game-worn sports memorabilia to be sold at auction. The No. 23 jersey worn in game one of the Chicago Bulls’ iconic 1998 finals run went for $10,091,000 million at Sotheby’s, netting an “astounding” 20 bids.

A record-breaking day. Michael Jordan’s iconic 1998 NBA Finals ‘The Last Dance’ jersey has sold for $10.1 million, setting records for a basketball jersey, any game-worn sports memorabilia, and most valuable #MichaelJordan item ever sold at auction. pic.twitter.com/7t8G98N5pW

“In the weeks since we announced the auction, there’s been palpable excitement from, not only sports fans, but collectors alike who are eager to own a rarified piece of history,” Brahm Wachter, Sotheby’s head of streetwear and modern collectibles, told Fox Business. The “record-breaking result,” Wachter continued, “solidifies Michael Jordan as the undisputed GOAT, proving his name and incomparable legacy is just as relevant as it was nearly 25 years ago.”

@entrepreneur Why can’t Michael Jordan sell his house? Find out what makes this mansion a real estate agent’s dream and nightmare. Plus, see all of the unique incentives they’ve tried to help move it off the market. #EntrepreneurTok #CorporateTikTok #RealEstate #mansiontour #realtors ♬ Troubled Basketball – DJ BAI

Diego Maradona’s “Hand of God” jersey from the 1986 World Cup, which sold for $9.28 million, previously held the record for the highest-priced jersey sold at auction. A Mickey Mantle baseball card sold last month for $12.9 million, the highest price a sports collectible has ever fetched.

This isn’t the first time a piece of Jordan memorabilia sold for millions. In October 2021 an autographed upper deck game jersey patch card sold for $2.7 million.