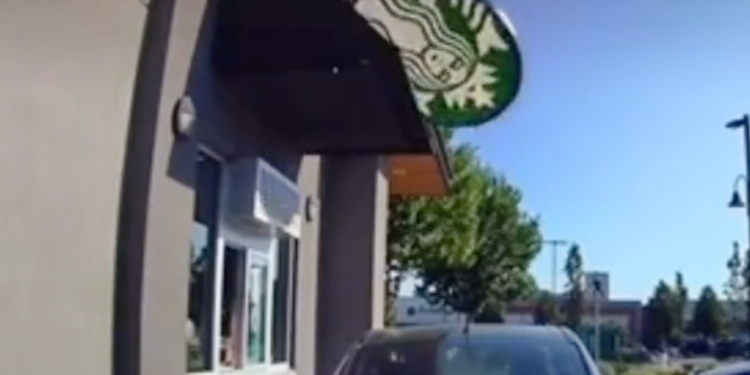 Employees working at drive-thrus have undoubtedly seen it all — from men ordering on horseback, to customers climbing in through the takeout window to even a cow passing through the line.

And though these bizarre incidents are comical at their core, others’ experiences are not so funny.

One Starbucks customer in British Columbia, Canada learned this the hard way when a Starbucks sign fell onto his car while pulling through the drive-thru, causing a venti-sized commotion.

TikToker Auvo (@nachoauvo) posted a video of the aftermath of what occurred after a massive Starbucks logo fell right on his car in a video that’s racked dup one 2.7 million views.

“This was very scary,” he captioned the video, which documents the building and the outline of where the logo should be before panning to him sitting stunned in his car showing his cracked windshield.

In a follow-up video, the TikToker shows additional footage which appears to be taken by a car behind him in which viewers can clearly see the sign begin to tumble off the side of the building seemingly out of nowhere before ripping onto his windshield and falling off to the side.

He told the Daily Hive that his son was also in the car at the time of the incident.

“It scared us pretty bad, my six-year-old was in the car. Scared him the most,” he told the outlet.

Viewers were equally horrified and riffing on the matter, joking that he should’ve used the opportunity to claim injury so that he could gain settlement money from the company.

“I would need 20 franchises, a billion dollars, and a drink named after me,” one user joked.

The video poster then cleared up in the comment section that the incident was unfortunately part of an already bad day that was made dramatically worse.

“We were having a shit day, my brother’s birthday who passed away,” he told viewers. “Fiancé locked the keys in the car. Starbies was supposed to come in clutch.”

But not to worry — he was indeed compensated for the damages to his vehicle, and then some.

“We have spoken to Starbucks. They have asked we don’t talk about the settlement since we are happy with how this worked out,” he shared. “I will say, —— Our wedding is paid for :)”

That’s news sweeter than a Frappucino!

Starbucks Canada told the Daily Hive that they are actively looking into the incident.

“Our partners on-site acted swiftly ensuring the safety of everyone there. We spoke directly to the customer and are actively in discussions with them to offer additional support,” the company said. “Starbucks Canada takes great pride in creating a safe and welcoming environment for all and it is our priority that this does not happen again.”

Entrepreneur has reached out to Starbucks for additional comment.

When Do You Fire A Client?