These Are (Some of) Bill Gates’ Favorite Books Of All Time 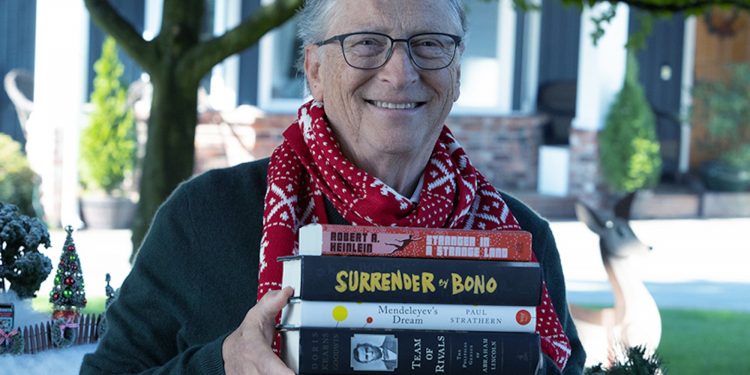 You are what you read.

Bill Gates, the fifth-richest person in the world and co-founder of Microsoft, typically releases favorite book lists seasonally and annually. But on Monday, to celebrate the holidays, he wrote, Gates released a list of (some of) his five favorite books of all time, irrespective of when he read them.

“All five are books that I have recommended to my family and friends over the years,” he wrote on his blog.

“I hope you find something new to read this winter,” he added. Gates’s book list, he said, includes a book he loved in middle school and one he said he just read (the Bono memoir).

Related: Bill Gates Just Released His 5-Book Reading List for the Summer — Here’s What’s On It

He gave the books categories of sorts, which are in quotes. Here’s the list:

Gates said that he and his Microsoft co-founder Paul Allen “fell in love with Heinlein when we were just kids.”

The book is a 1961 science fiction classic that covers the journeys of Valentine Michael Smith from Mars and to Earth and his eventual establishment of a free-love commune on a post-third-world-war Earth. The commune has some “hippie” trends, including being pro-peace.

The billionaire and philanthropist said he enjoyed the predictive nature of the book.

“I think the best science fiction pushes your thinking about what’s possible in the future, and Heinlein managed to predict the rise of hippie culture years before it emerged,” Gates wrote.

Bono is the lead singer of U2, the Irish rock band, and published a memoir in November with Penguin Random House.

Even if you are not a fan of the band, “it’s a super fun read about how a boy from the suburbs of Dublin grew up to become a world-famous rock star and philanthropist,” he wrote.

Even though Gates says he is friends with Bono, he had not heard some of the stories in the book, he added.

Team of Rivals: The Political Genius of Abraham Lincoln is a book about Lincoln’s rise to the presidency published in 2005. It won a Pulitzer Prize and inspired a movie that won an academy award, Lincoln.

4. “Best guide to getting out of your own way”: The Inner Game of Tennis, Robert Gallwey.

Gates is known for his interest in self-improvement through reading.

He says this book is a “must read” for tennis fans but that everyone can learn something from it, mainly, how your body affects your mind — i.e., the “inner game,” that you play with yourself.

This book, generally speaking, covers how the periodic table came to be. “It’s a fascinating look at how science develops and how human curiosity has evolved over the millennia,” Gates wrote.

Do You Have the Right Insurance for Your Business? Here’s How to Understand Your Options